7th Avenue Review: Do the Functionally-Designed, Water-Repellent Sofas Live Up to the Hype?

The upstart maker is changing the couch game. I gave its endlessly modular sofa a thorough at-home test.
Written by
Marah Eakin 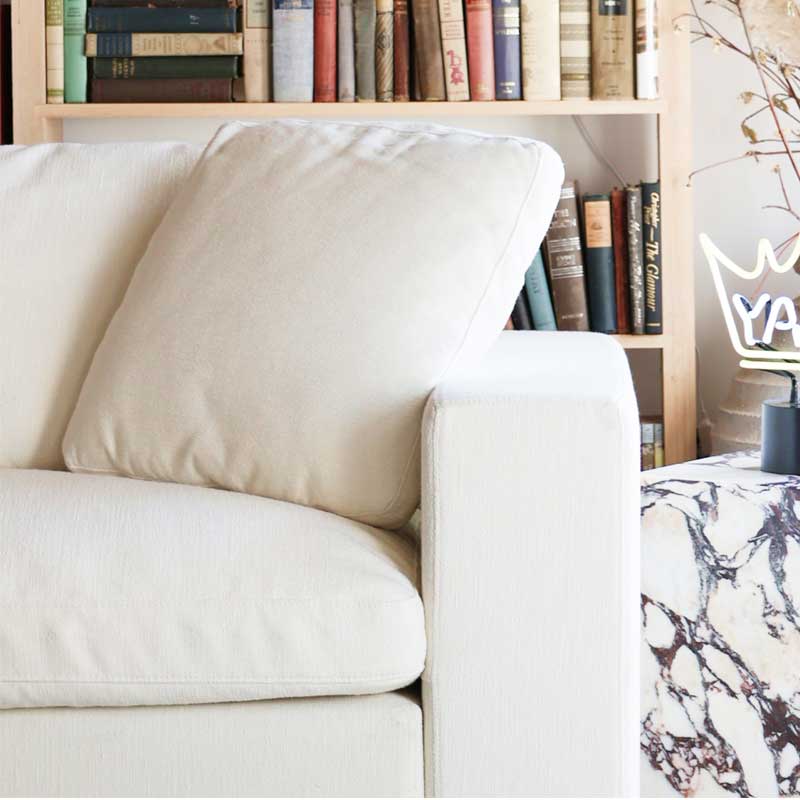 7th Avenue is a mostly-online company (with showrooms in California and Nevada) that specializes in fully modular sofas.
The company’s couches are stain-resistant, sustainably built, and can be almost any size or shape you like.
We tested a three-seater sofa with an ottoman, putting to the test in a Los Angeles home full of rambunctious toddlers, messy eaters, and world-class sprawlers.

Between the time I was 24 and 28, I moved four times between three different cities. I’d spent much of my life using hand-me-down furniture, and while I always love a good vintage piece, when it came time to get my first apartment at 24, I did want to get a nice new couch. I went to Ikea, as one does at that age, and quickly realized that in my third-floor apartment with the dimensions we had and the Brooklyn stairways we had to deal with, all we could really get was a loveseat. It was a bummer, but we did it.

Fast forward a year and I was moving to another part of Brooklyn where I’d have more room. When I put the perfectly fine loveseat in the space, though, it looked shrimpy and wrong. I had to pop for yet another couch, even though the one I had was still good. It’s a process I’d have to repeat again over the course of my twenties, too, moving from apartment to apartment, city to city, always in search of the perfect seating arrangements.

If only I’d known about 7th Avenue then. The relative newcomer to the world of furniture retailers claims to make “the world’s greatest modular sofa,” specializing in pieces that can expand and contract and look great everywhere from loft spaces to suburban basements. Got a 7th Avenue loveseat but you’re moving to a big new house? Order a few new sections for your existing piece and you’ll have the L-shaped sofa of your dreams. Downsizing to a smaller space where your couch just won’t fit? Pop the arm off one end and snap off a section. It’s just that easy.

Getting hands-on with the 7th Avenue

As previously mentioned, 7th Avenue is known for its modular furniture. The company offers sofas in a range of configurations and pieces, meaning you could get a two-seater with double ottomans, a traditional three-seater, or even a ten-seat-wide mega-sofa for whatever reason. Want to flip your leg rest from one side to the other? That’s not a problem. Opted for white upholstery initially but three years and a couple of kids later thinking you’d rather have black? The company will sell you all new covers so you can make your couch look brand new. You can even pick whether you’d like your back cushions to be soft, medium, or firm—which, again, you can always change down the road as well, after a few months of sitting on it and figuring out what’s what.

Since 7th Avenue is still relatively new, it does have a reasonably limited range of colors and fabrics, though it’s always expanding what it offers. As of right now, the couches are available in pure white, black, soft gray, and a kind of eggshell natural white. It’s worth noting that all of 7th Avenue’s upholstery choices are water-repellent and stain-resistant, and they’ll easily repel water, coffee, pet (or toddler) urine, ketchup, and even red wine.

7th Avenue is mainly online, but the company does have a few showrooms in California and Nevada (with one soon to open in Texas) where you can go and sit on one of their couches so you can test out scale, cushions, and see the color options. We went to the one in L.A. to order ours and it was really eye-opening, just in terms of being able to actually figure out how big it would be in the space and what color we really liked. We went in loving black, but we left opting for soft gray three-seater sofa with an ottoman, which looks lovely in our space.

Like so many companies, 7th Avenue has dealt with supply chain issues. While some sofas that you might order from the company will show up in two to four weeks, it took ours a couple of months to arrive because the gray was, at the time, a relatively new fabric to the brand. In most cases delivery will be two to six weeks.

Because we live in the L.A. area, 7th Avenue’s local delivery team brought it to our house and set it up entirely within the span of about 15 minutes. They also moved our existing sofa to the garage, just because they’re nice.

The sofa came in a bunch of boxes and the delivery team just snapped it together, poofed out cushions, and voila. It did take about a day or so for the vacuum-packed cushions to really expand to their full potential, but that was fine.

Living with the 7th Avenue Sofa

Our 7th Avenue Sofa is very comfortable, in part because we chose the medium-soft cushion options, per my husband’s request. I think I might opt, in the future, to bump the cushion behind me on my end of the sofa to medium-firm, but the beauty of a 7th Avenue sofa is that I could totally do that. It’s like one of those adjustable mattresses for couples who disagree on how they like to sleep. It’s my choice!

I’ll note that our 7th Avenue Sofa doesn’t quite have the back support our previous Crate & Barrel sofa did, probably because it has a lower back and then pillows to support sitters rather than a traditional solid cushion on the back. The three throw pillows that came with the 7th Avenue couch can make up for that, though, especially if you have the couch against a wall and can throw them behind where you’re sitting for a little head or neck support.

Our 7th Avenue sectional is great for sprawling out. I’ve taken hours-long naps on it, and my husband loves to kick back on his chaise-like lounger every night. I personally find the ottoman portion to be a little wide for me to climb up on—it’s like I’m getting into a twin bed from the very end or something, the way we have it situated with our existing coffee table—but I’m also perfectly happy to just pull up legs up on the other end, or kick them over and just rest my feet on the side of the ottoman.

Our 7th Avenue sectional is great for sprawling out. I’ve taken hours-long naps on it, and my husband loves to kick back on his chaise-like lounger every night.

The sofa feels well-made, and given how much jumping my 4-year-old twins have done on it, it seems pretty durable as well. Our kids have spilled juice on it, kicked their muddy shoes all over it, and thrown the pillows all over the ground and all of those messes have cleaned off the water-repellent and stain-resistant fabric pretty quickly with a damp towel. My husband, on the other hand, got chocolate ice cream on it, and that’s been a longer process with stain removers and so on. It’s fine for now because we can just flip the cushion over if it doesn’t ultimately come out, though—or order another cover just for that one cushion.

The sofa feels well-made, and given how much jumping my 4-year-old twins have done on it, it seems pretty durable as well.

When it comes to cleaning, if you want to give your 7th Avenue couch a full refresh, all covers are removable and washable—7th Avenue says you can even throw them in the washing machine.

I do have two quibbles with the sofa, having used it for a couple of months now: First is that I don’t think it looks quite as factory fresh and picture perfect as it did the day it came off the truck. I don’t know if that’s just because the cushions are always slightly askew now and tossed around or if it’s gotten a little sort of squished, but it doesn’t have the formal put-together nature that our Crate couch did.

My other quibble is that the ottoman’s top cushion isn’t actually attached to the ottoman, which is great for when you want to clean it but annoying for all other times. I feel like every time someone uses it, when I walk by it later the cushion is pushed 2 inches down the ottoman, meaning I’m constantly seeing two inches of flat, gray ottoman base. (Since this review, 7th Avenue now has an anti-slip mat for ottomans, which should solve this problem.)

How comfortable is the Sofa?

Buyers have the option to pick medium-soft or medium-firm cushions. We went with medium-soft, and it is indeed very cushy.

Could it work with any design style?

7th Avenue’s modular design and aesthetic means this sofa could work anywhere from a stark industrial loft to a suburban family TV room, depending on what color you pick. 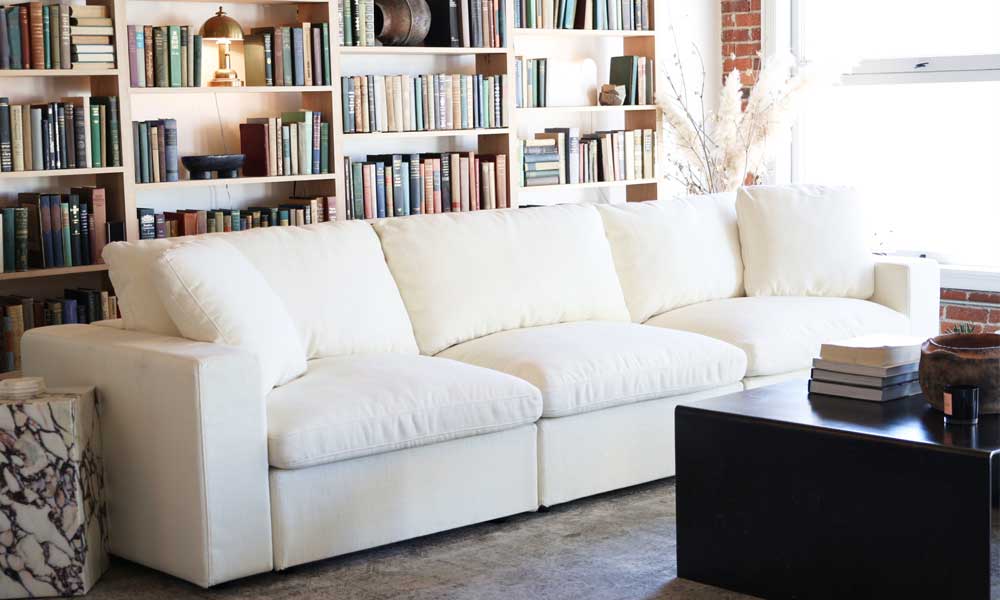 7th Avenue's flagship product is a sofa with endless modularity, water-repellent & stain-resistant fabrics, removable and machine-washable covers, memory foam cushions, and many more. All products are sustainably-built, free from harmful chemicals, and designed to last 10 years or more. 7th Avenue was founded  transform the way we shop for home products both online and experientially in-person. 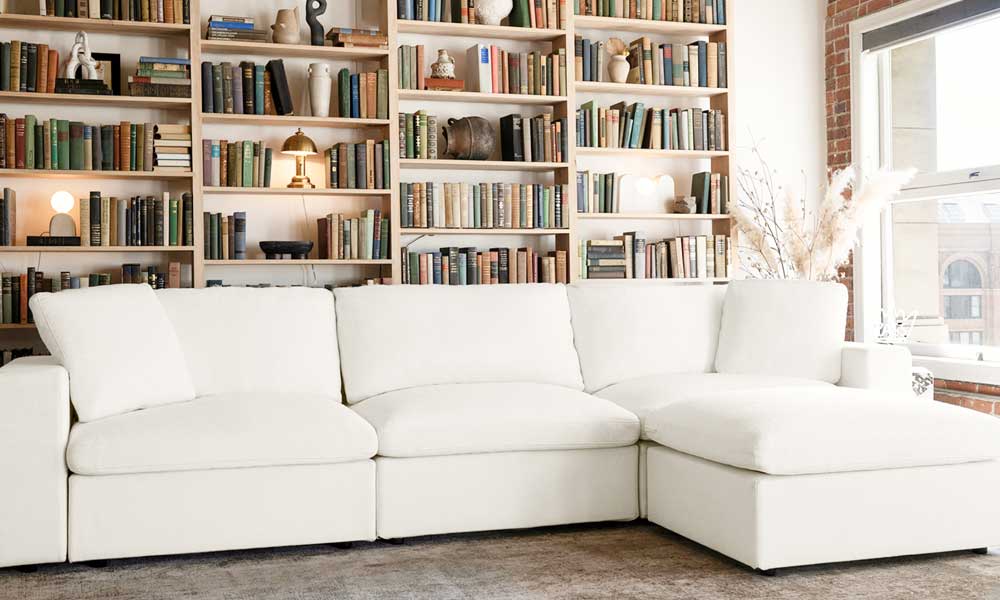 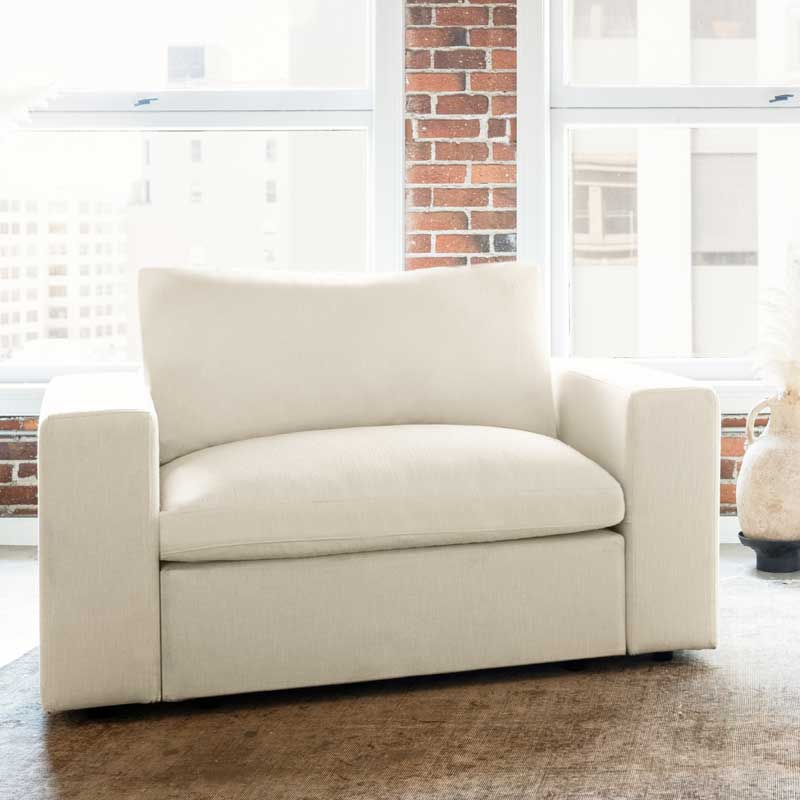 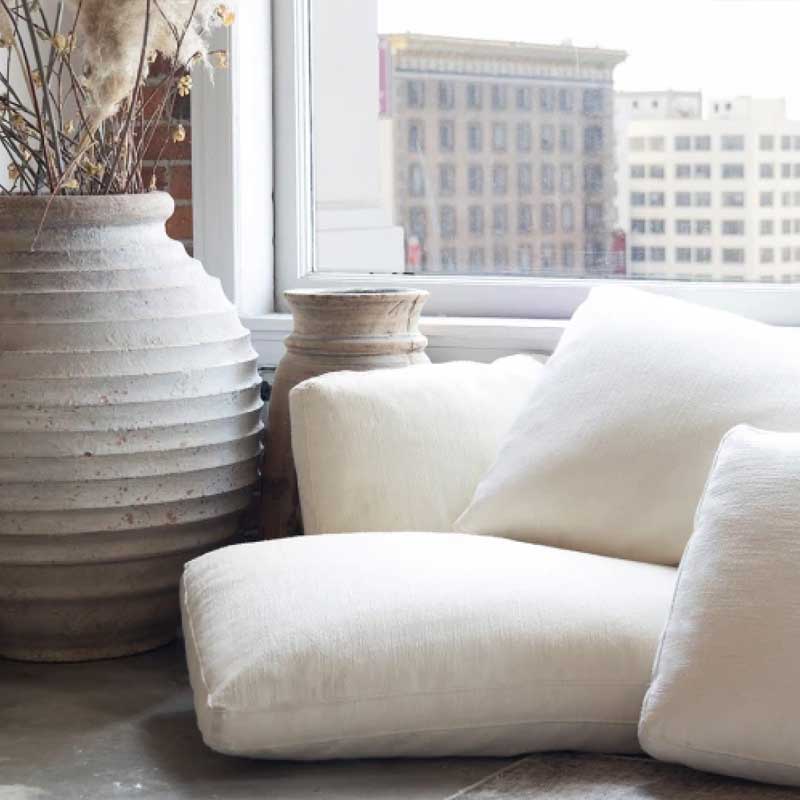 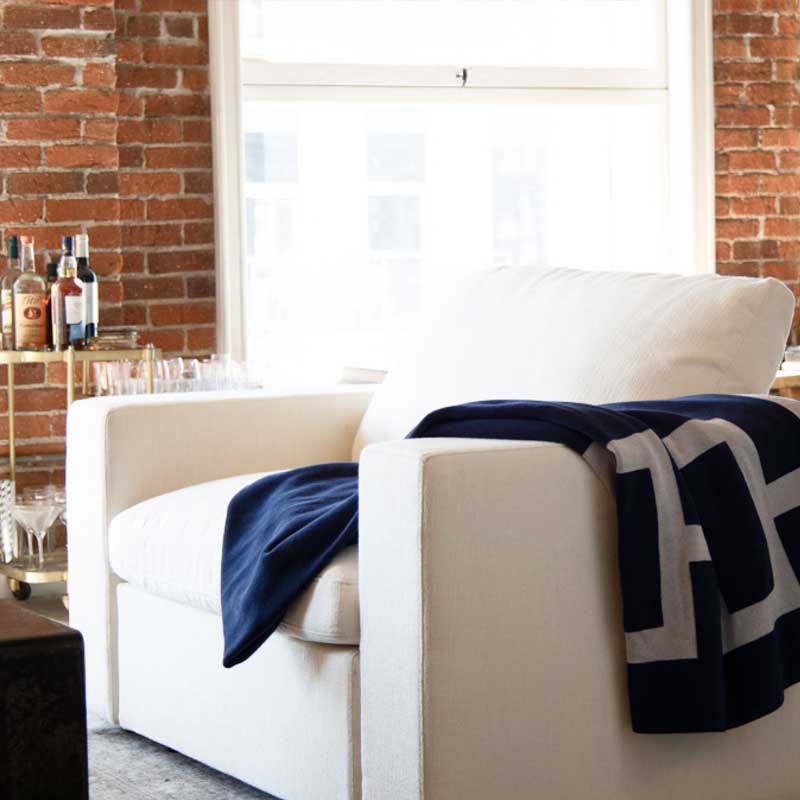 A sofa I'd happily recommend

Overall, I really love our 7th Avenue sofa, so much so that I would and have recommended it to others. I think it’s well-priced for what you’re getting and I love that you can transition it from space to space, design style to design style.

While I’m no longer in my twenties and bouncing from place to place, I think this sofa would be a great option for a young person who’s not yet settled into one long term living situation. Then again, I also think it works for more established people, families full of messy kids, and everything in between—the water-repellent and stain-resistant fabric seem a perfect match for every lifestyle. Two enthusiastic thumbs up. 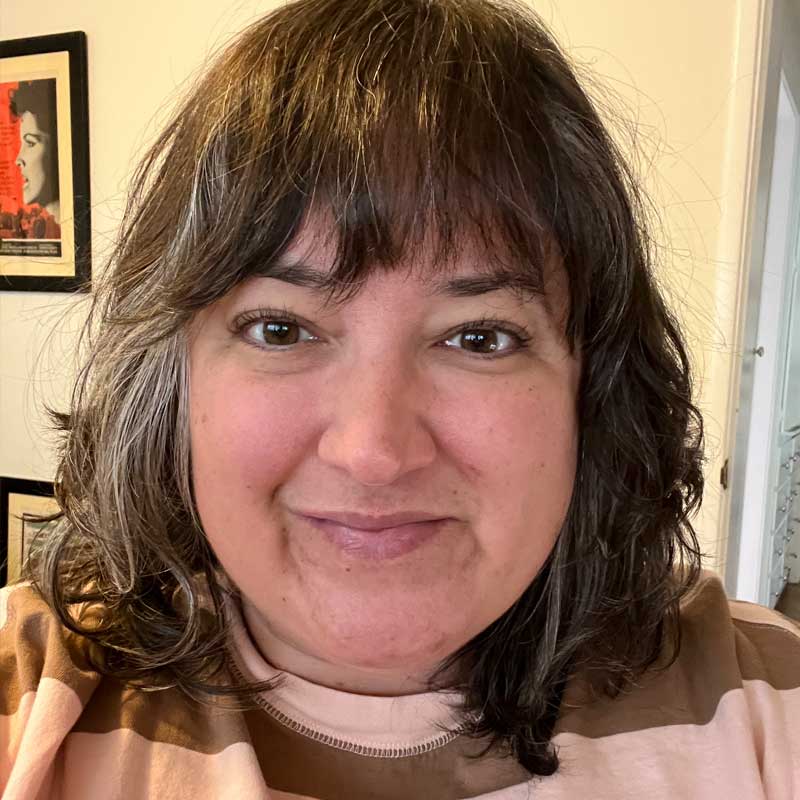 Written by
Marah Eakin
Marah Eakin is a Los Angeles-based freelance writer whose work has appeared in Wired, Vulture, The Strategist, Byrdie, The Ringer, Dwell, The L.A. Times, and a number of other publications.
Disclosure: If you buy a product from a link in one of our reviews, we may get a small share of the revenue from the sale. We sometimes receive products free of charge from brands to test and review. This does not drive our decision as to whether or not a product is featured or recommended.